Moreover, solar power generation helps cut down electricity bills. All these beneficial features of the clean energy have encouraged the growth of solar manufacturers. Statista provides a record of the revenue of the major solar companies in 2016. You can view the graph below. It exhibits the growth of the major players in the solar industry. 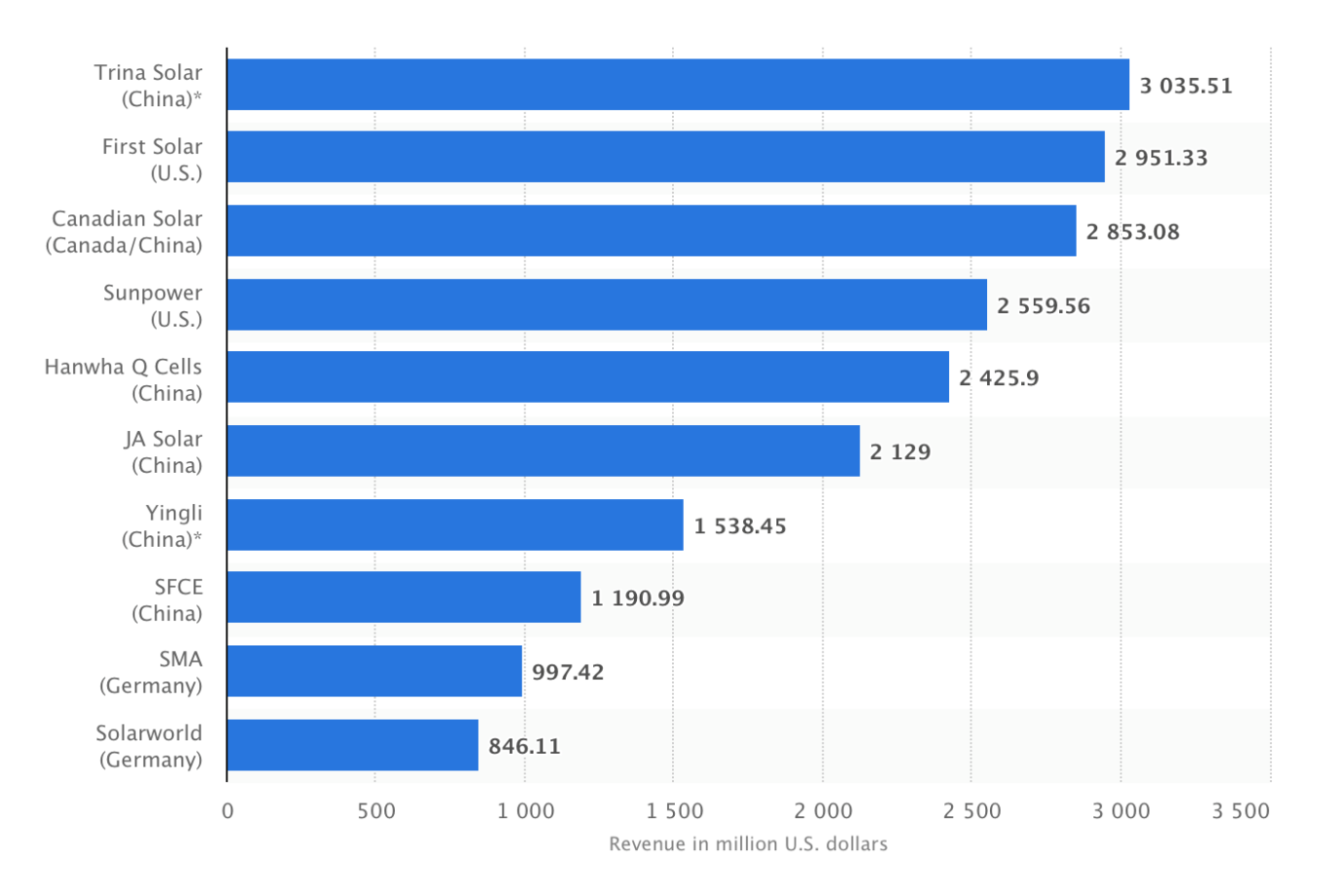 At the same time, technological advancements aren’t under wraps. In fact, the feats achieved by tech stand in the limelight across a broad array of industries. These include progress in the healthcare field, renewable energy, the fashion industry, and so on.

Here is an in-depth look at how solar companies have harnessed the potential of technology to become more efficient:

Solar companies use tech to boost the efficiency of solar panels

A company thrives on the basis of a unique product. This holds true in the case of solar companies too. Solar initiatives either install solar panels or provide the panels themselves. Typically, such solar panels can convert less than 14% of the sun’s energy that reaches them, which is pretty inefficient.

The story doesn’t end here though. Solar manufacturers are actively using new technology to boost the efficiency of solar panels. A case in point is SunPower that has enhanced the efficiency of their photovoltaic system from the market average of 14% to 22%.

Presently, further advancements in solar power tech are in the pipeline. Such innovative tech can increase the efficiency of solar panels by about 50%. It does so by combining semiconductor panels. For the time being, however, such tech is limited.

Besides, tech has advanced to optimize the efficiency of solar panels too. For instance, solar concentrators can maximize the output of photovoltaic systems by concentrating the sun’s radiation from larger areas to small ones. In fact, such tech can boost the output by roughly 50%.

Another factor concerning maximizing the efficiency of solar panels is their positioning in respect to the sun. In this regard, a key tip is to make sure that the panels are directly facing the sun throughout the day. Tech plays a significant role in this context too.

Solar companies have come up with ground-mounted solar tech that tracks the movement of the panels. In doing so, the PV tracking system increases electricity production by moving the panels in the direction of the sun.

Some solar trackers are installed with an active circuitry system. They align the solar panels in the sun’s direction so that more radiation strikes their surface and boost the efficiency. Other types of solar panels employ a shadow feedback signal tech to follow the sun’s direction throughout the day. Still other types of solar trackers use a clock motor to adjust the panel’s orientation as per the sun’s position.

Put simply, the trackers tilt and shift the solar array’s angle so that it is facing the sun. Solar manufacturers are increasingly embracing this tech since 2016. A GTM report confirms a 254% upward trend in the tracking system’s popularity.

When it comes to solar installation, a major turnoff for homeowners is the appearance of the solar system. Solar companies are, however, not letting that become an obstacle to their growth. To this end, the industry is utilizing the potential tech.

An inspirational example can be drawn from a Boston-based design firm, Sistine Solar. The venture works for enhancing the aesthetic enhancement of the solar panels to give them a customized look. The startup has designed a “solar skin” that makes the solar panels look like a roof without negatively impacting their efficacy.

Likewise, Tesla’s chief executive, Elon Musk is also working on creating revolutionary solar roof tiling. These tiles will come in a broad range of shapes and sizes and will generate electricity. Besides, Tesla claims that the price of these solar roof tiles will be less in contrast with typical solar roof tile. The standard prices stand at $24.50 per square foot, whereas, Tesla’s tiles will come for $21.85 per square foot. They boast features like better insulation, less cost, longevity, and clean energy generation.

It allows the installation of PV panels on water bodies like ponds, quarry lakes, and canals. The company initiated work on this project in 2011. Its product is increasingly gaining prominence for its features of simplicity, easy installation, and economical pricing.

In 2017, a subsidiary of this French floating solar specialist, Ciel & Terre Brasil, completed the first floating solar project in Brazil. It is built on a pond at Fazenda Figueiredo, Cristalina in Goias. The PV project has an incredible capacity of 304kW. Such innovative tech offers extensive benefits for water-intensive industries.

Since the sun rises only during the day, the concept of solar storage and off-gri

Energy Efficiency Tips for Your Home

10 Energy Savings Tips For Your Home There are many things that homeowners can do to reduce their energy bills. Some ideas, such as installing-energy efficient windows & doors, can result in significant savings. Other Read more…